The number of common dolphins washing up dead is serious and most worrying. I’d be 99% sure they are being drowned in pelagic trawls, especially after looking closely at the skin damage on Tony Wheelan’s video clip of recent days (link below). Mick O’ Connell, IWDG mentions that on previous occasions they were found to contain scad (horse mackerel). If that is the case now, then that is very strong evidence that it’s pelagic trawlers doing the damage. Ireland’s quota for scad for 2018 is 25,625 tons.

On March 9th 2018, just a few days ago, the pelagic boats landed a declared catch of 19,949 tons, that’s 78% of this year’s quota (SFPA stats), caught in mostly January and February, which is high season for this particular fishery . The catch will almost certainly be greater than this declared amount. Doesn’t this coincide remarkably well with this period of high mortality of common dolphins?

Common dolphins used to spend the winter months in their thousands off the coast of West Cork, feeding on inshore sprat shoals. In the winter of 1988, I saw the largest number of dolphins ever, certainly more than 10,000 feeding on vast shoal of sprats that had assembled around Galley Head, where we had our prawn pots. Not before or since was there so many sprats in one place. They were there for most of that winter, proving that sprat shoals were important prey for hungry dolphins. My only living witness to that extraordinary gathering of dolphins is Connie Burns of Union Hall.

There were still large numbers of common dolphins as we moved into this millennium, when I started whale watching in West Cork in 2001. But with less and less sprat about, year upon year, due to their removal by pelagic trawlers, there are no large numbers of dolphins in the winter months anymore, especially over the last 7/8 years, and this coincides with the steady rise in winter dolphin strandings being documented by IWDG. With no sprats to sustain them, they have moved on elsewhere in search of other prey, and the large shoals of scad off the west coast would be suitable material for them to feed on. With prey fish scarce elsewhere in the winter months, having located large shoals of scad, common dolphins would stay in the vicinity of them; feeding sporadically on the rich oily fish, thus becoming all too vulnerable to being trapped in the cod-end of the gigantic pelagic trawls aimed at the same fish, and inevitably drowning. 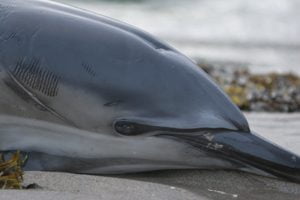 I had a young guy called Kieran fishing with me on the MFV Equinox as temporary crew out hake netting. After fishing with me for the few trips, he got himself a job on one of the pelagic trawlers and was delighted with it, making good money. A few months went by and I met him one day in Skibbereen, in fine autumnal weather. I asked him how come he wasn’t out at sea making money in the fine weather. His reply was….. “couldn’t stand any more of the carnage”. When I pressed him on this, he said……. “All the drowned dolphins in the net, couldn’t take any more of it, so I quit”.

The skippers of these giant trawlers will swear blind how they never catch dolphins in their fishing operations if you ask them. No surprise there, and they are still in denial it seems. When or how often do they carry independent observers to monitor by-catch of cetaceans, I wonder ? Are they present on winter trips at the scad fishery? If not, they should be.