Forty years ago today, was the day the Fastnet yacht race was in full swing, with 303 boats entered. The race was suddenly turned into a maritime disaster by an extraordinary meteorological event, that produced hurricane force winds and gigantic waves, which ploughed right through the track of the race, leading to the loss of 19 lives and 5 yachts of the 24 that were abandoned in the storm.

The ensuing rescue effort was the largest marine rescue ever organised in peace time. I remember that day well, as I was out at sea all day with a group of anglers, fishing on a shipwreck that sank after being struck by a torpedo in World War I, about 10 miles to the east of the Fastnet rock. 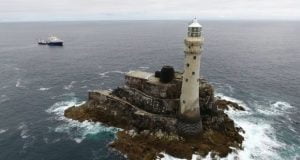 The day started flat calm with a blue sky and no sign that there was bad weather on the way. It was a perfect day to set about the process of anchoring the boat up-tide of a wreck to fish with rod and line for the large ling and conger eels that lurked inside the sunken ship. We stopped briefly at Toe Head and caught half a box of mackerel for bait and by 10:00 am we were at anchor catching a steady supply of large conger eels and a few good sized ling, and all was well.

Then at around 12:30 out of nowhere, a sudden stiff breeze picked up from a southerly direction and continued to increase rapidly, such that by 14:00 the sea surface was a mass of churning white breaking waves. Puzzled by this sudden change in weather conditions, I turned the radio on to listen to the BBC shipping forecast at 13:55….. “South westerly Beaufort 4 to 5”,  was the wind forecast given for the Fastnet sea area.  As those words came out of the radio the wind had already reached force Beaufort 7 to gale 8 and was still increasing. The wind pressure on my anchored boat pushed us to the north a little off the wreck and the angling went dead. I said to the anglers “bring your lines in, we need to get the **** out of here, that forecast is totally wrong”.

By the time I had hauled in the anchor and started motoring back towards the harbour, the wind was at severe gale 9 and increasing. After a little under an hour of travel I was truly thankful to be back in the shelter of Castlehaven harbour, with the wind now storm 10 and a really angry sea developing. Having unloaded anglers, tackle and some fish, I secured the boat to her mooring and had a difficult time rowing my dingy into the landing place against the wind. A short drive back home, dodging broken branches and a tree or two, the wind had now developed that loud roaring noise that comes only with storm force winds or higher.  Just as I was walking towards my house, two large sheets of corrugated iron flew past my head like sheets of cardboard in the howling wind. I was glad to be back in the sanctuary of home.

As the night wore on we sat up listening to the noise of the storm and crashing objects flying about like confetti outside. The power lines went first, then the phone, so we sat up by candlelight late into the night, discussing the horrifying fact that the Fastnet race was underway and caught out in the full fury of the storm. It was difficult to sleep amidst all the noise and I lay in bed awake for a long time, picturing the predicament the yachts found themselves in. 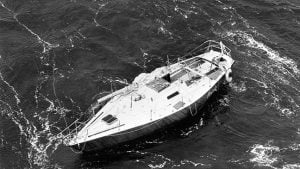 The storm had abated to less than gale the next morning and subsided to normal August weather by the late afternoon. I turned the radio on whilst having breakfast to see if there was news of the race, and of course there was, plenty, with lifeboats, helicopters, aircraft and warships all assisting in a massive rescue mission, looking for missing yachts, life-rafts and crew. It was the biggest marine rescue mission since the evacuation of Dunkirk in World War II.  With onshore winds prevailing in the weeks following, all sorts of bits and pieces from the stricken yachts washed ashore along the south coast of Ireland. It was truly a maritime disaster to remember.

A meteorological analysis of the event afterwards showed that an ordinary low pressure system of no import, was approaching the area, containing no serious wind or bad weather, until by chance the jet stream blew right across the top of the low for a while, creating a powerful venturi effect and sucked out the air in the middle of it to a dangerously low pressure. Three tightly packed hurricanes formed quickly as a direct result of this scenario and went straight through the area full of racing yachts.

Many of the surviving yachtsmen reported how giant waves struck the boats, coming from all directions, making it impossible to keep a vessel hove to– facing into the prevailing wave direction. As a result of this, many yachts had rudders broken by the violence of the waves and with no steering were then in grave danger of being knocked over and capsized. Twenty four yachts were abandoned during the storm, such was the severity of the weather.

Some 16 years later, in the mid 1990’s, I was commercial fishing about 40 miles southwest of the Fastnet, when a similar event took place. The day started calm and quiet and in the late afternoon we began hauling the gill nets we were deploying to catch hake. We had four sets of these, each around two kilometres in length. The first sets was hauled without event. As we started the second set, once again a sudden stiff wind picked up out of nowhere and increased rapidly, just like the Fastnet race storm. By the time we had hauled the third set and stowed it aboard, the wind was now up to severe gale. Whilst we brought in the last set of nets, the wind was now screaming in the boats’ superstructure, so loud that you couldn’t hear the her engines and we had to shout to be heard. It took a long time to recover the last set with both wind and waves making the task all the more difficult, but we persevered and I was never so glad to see the last anchor and buoy line hauled in, as were the crew.

I was shocked once again, just like the Fastnet race event, to see how quickly a big angry sea could develop, given enough wind and low pressure. By now the waves were colossal in wind I had never seen the like of. I called the only other boat I knew of in the area on the VHF radio to see was she OK. She was, but skipper said he couldn’t haul any more nets due to the severe conditions, so had decided to adopt hove to tactics until the storm had passed, (the safest way of riding out such weather), and was afraid to return to the land as it meant taking the huge seas on the beam, a dangerous state of affairs in such conditions, with a high risk of capsizing. He told me later that week that the storm raged all night and well into the next day before it eased off.

I had a big steel catamaran of 28 tons weight at the time and she could take any weather on the beam, so I decided the best thing we could do was head for home and shelter. A huge container ship steaming slowly into the waves passed close by us on the way in and was disappearing from view periodically, such were the size of the seas. Even the moon, blazing in the night sky, was occasionally eclipsed by mountainous wave tops, as we dropped into the deep troughs between the waves.  A few miles from the land the wind fell to severe gale, a mile or so off it had reduced to gale and below, and then unbelievably, as we motored into Union Hall harbour in the wee hours of the morning, the water was glass calm, reflecting the village lights like a mirror and not so much as a breath of wind to ripple the surface. It was almost like waking up from a nightmare when we were tied up and engines shut down, listening to the complete silence of the harbour at four o’clock in the morning.

I listened with interest to sea area forecasting the next day to see where the storm had gone, and there was not a mention of any bad weather, anywhere around these Isles, as though it never happened.

Ed. comments……This last story serves to remind us that the weather forecast most people tune into is largely a land area forecast often a strong east coast/Dublin bias which isn’t that useful in determining the conditions at sea in offshore southwest waters. For this reason we tend to pay a lot more attention to sea area forecasts, Valentia radio and of course to weather apps such as Windguru, Magic Seaweed and Ventuski all of which are useful in helping us gauge wind strength, direction, swell and precipitation….it’s never about how warm or sunny it feels on the beach!